Kangra Painting An Indian miniature style of development developed in the hilly region of Kangra Valley from the 18th century to the mid-19th century. After the decline of Buddhism in India, a kind of void was created in the field of painting due to lack of social stimulus. The Vaishnava sect emerged in the Middle Ages. Followers of this sect composed poems on Krishna and Vishnu. Many poets like Tulsidas, Kabir, Kamal, Jaydev became. Many artists painted on his poetry. It was first created from art from Rajasthan and northern parts. This art got shelter in Guler state in Kangra valley. Next Mandi, Suket, Tehri Garhwal etc. This art was also cultivated at the center. The style flourished in the Kangra Valley, hence the name Kangra (Kangda) painting style. 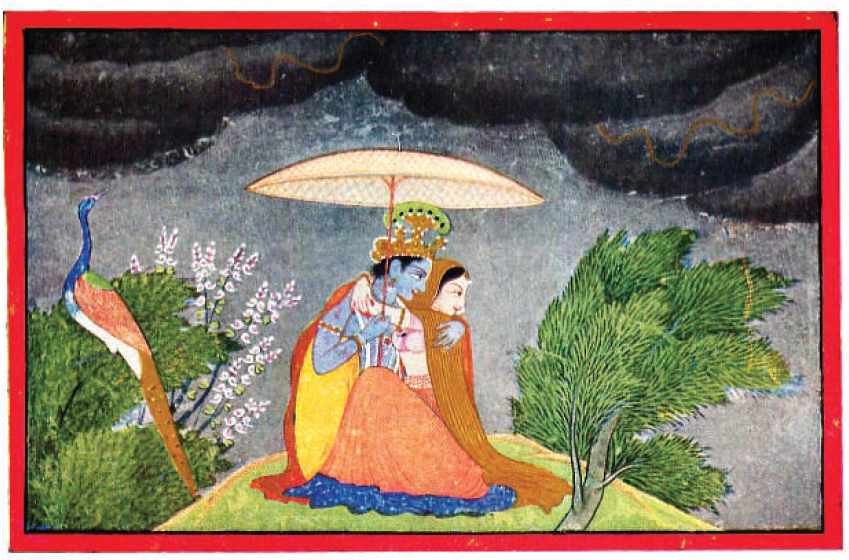 The hilly terrain, rivers, trees, and valleys of the Kangra Valley are the subject of much of the painting. Liberation is considered to be the ultimate goal of human beings in Indian culture and art is one of the most important means of achieving it. Perhaps you can say that the pure joy that comes from a great work of art is liberation. This happiness can be plundered in Kangra art.

According to the Krishna sect, the Bhagavatpuran and especially the events on Radhakrishna gained importance in Kangra painting. Spring, summer, etc. While depicting the seasons, nature is depicted with flowers and birds in the background by giving importance to the heroes and heroines. Happiness, sorrow, infatuation etc. Emotions are effectively shown.

These pictures are drawn in red on brown paper (this paper is known as Sialkoti paper). The picture was then painted white. When it was rubbed and smoothed, it was painted black or brown. After painting the background, people and other objects are being painted. Outlines for drawing these figures. Original drawing, coloring, final drawing were mostly done by different artists.

Kangra pictures mean love. But in the form of Radhakrishna, this love becomes devotional. Kangra painters have succeeded in painting it. There is no compromise in the smoothness, rhythm, or shape of their smooth lines.

Kushan Lal, Hastu and Purakhu were famous artists of this genre. From the point of view of today’s aficionados, these paintings seem more penetrating due to their beautiful design than expressions. She was particularly concerned with the luxurious life of the Rajarajavadas, so that Ranjanshakta was more effective than expression. From a distance, they only look beautiful and elegant, but on closer inspection, they show a dramatic depiction of emotions.

W. P. Archer, Anand Kumaraswamy, M.Sc. Randhawa researched the painting and introduced it to the audience. But their roles are mostly historical. Today’s aficionados appreciate the juiciness of the colors and the beautiful arrangement of shapes in the Kangra paintings.

In this style, the pictures of Virhini, Rain Shelter, Utkanthika, Abhisarika are especially noteworthy. The woman in this picture is distraught and is trying to forget herself in singing. All the lines in the picture are vertical and the balance of the picture is well maintained due to the sloping string in the woman’s hand. The color scheme of the picture suits the mood of the woman. The color scheme of the painting, especially the red color of Krishna’s umbrella, seems to be very effective. The woman in the picture is eagerly waiting for her lover to decorate the flower bed. The distraction in her eyes and the eagerness that flows through every line is effective. More or less shades of color have brought effective depth to the picture. Convergence is one such penetrating picture. It depicts a woman who is not afraid of snakes or ghosts, but has gone out to meet her lover in the moonlight.

It is a beautiful style that is reminiscent of old folk art, with its delicate lines and impressions.