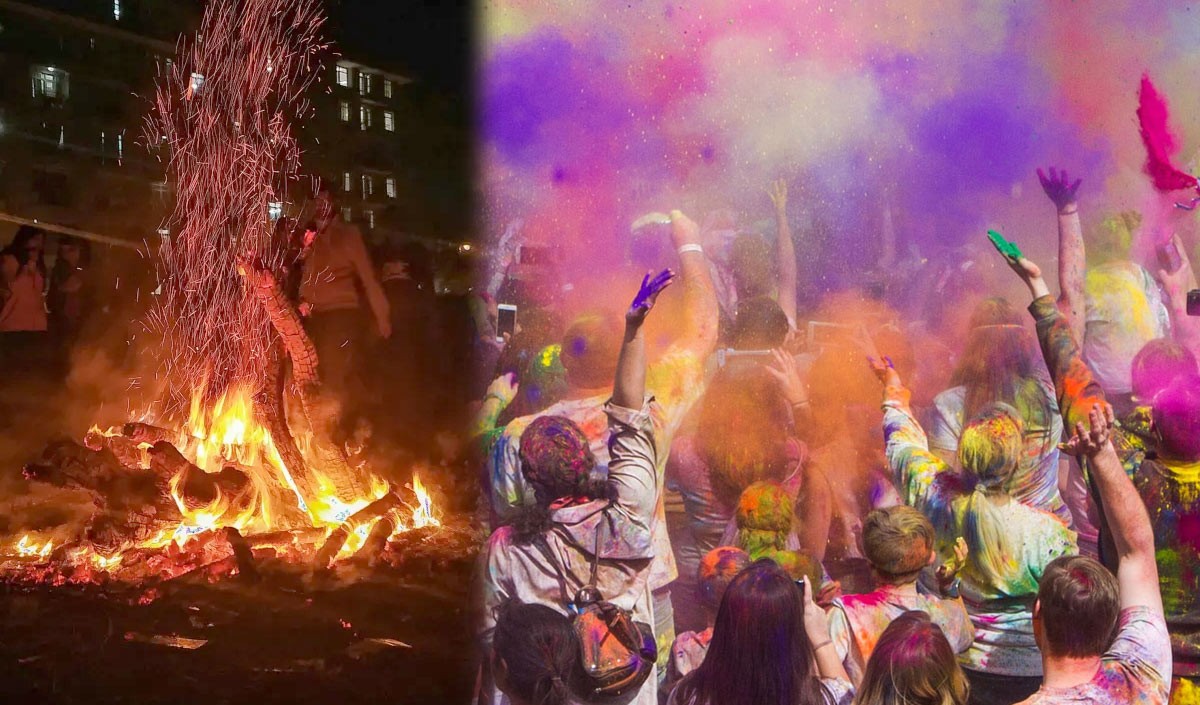 Although Holi festival is a nine-day festival, it is traditionally celebrated for two days in most places. Under this, Holika is lit on the first day, which is also called Holika Dahan. On the second day, which is called Dhulendi, people apply color and gulal on that day.

Holi, which falls on the full moon of Falgun month, is a festival of joy and gaiety. This time, more enthusiasm is being seen about this festival because after two years the situation of Corona is under control and people are organizing Holi Milan celebrations etc. On this festival full of gaiety, an example of social harmony is seen when people of all classes and religions celebrate this festival by applying colors and embracing each other. On this day people make groups and leave the house and go to the houses of others and apply colours, eat sweets, feed them and wish each other good luck. Cultural events are also organized by the groups.

Although Holi festival is a nine-day festival, it is traditionally celebrated for two days in most places. Under this, Holika is lit on the first day, which is also called Holika Dahan. On the second day, which is called Dhulendi, people throw colors, abir-gulal etc. at each other and Holi songs are sung by playing drums. In many places, women also observe a fast on this day. The information about the arrival of Holi festival is received from Holashtak. Holashtak can be said to be a runner who brings information about Holi festival.

Different colors are seen in Braj

The gaiety and fun of these 9 days of Holi is made in the Braj region. The Lathmar Holi of Barsane is quite famous. In this, men put color on women and women beat them with sticks and cloth whips. In Mathura and Vrindavan, the festival of Holi is celebrated for 15 days.

In view of the arrival of Holi, a few days in advance in the rural areas of the country, the work of making thin balls of cow dung and Anjuli-sized Gularis starts. While making the middle of them, a hole is made with the finger. When they are dried, garlands are made by threading them in ropes. Two or three days before Holika Dahan, sticks of Holi sticks etc. are started to be kept. Along with the collective Holika, all the families living in the same house additionally light Holi. There is also a tradition of distributing the uprooted gram, barley and wheat grains in the form of plants at the time of Holi Dahan.

Before Holika Dahan, women worship Holika Mai by taking water in a vessel and roli, rice, kalava, gulal and coconut etc. Holi is worshiped with these materials and water is offered. The yarn is wrapped around Holika giving circumambulation. According to the scriptures, Holika Dahan is completely prohibited in Bhadra Nakshatra. This is the reason that in some years Holika Dahan takes place only at seven o’clock in the evening and some year at three in the morning. On this day men must also do specific worship of Hanumanji and Lord Bhairavdev. Every man and woman should eat food only after seeing the flames at the time of Holika Dahan.

On the day of Holi, various dishes like Gujiya, Kheer, Poori and Dumpling etc. are cooked in homes. Besan sev and Dahi Bade are also made a lot on this day in Uttar Pradesh. Kanji, Bhang and Thandai are special drinks on this festival.

It is said that in ancient times there was a very powerful demon named Hiranyakashipu. He started considering himself as God. He had banned taking the name of God in his kingdom. Hiranyakashipu’s son Prahlad was a devotee of God. Angered by Prahlad’s devotion to God, Hira.Yakashipu gave him many harsh punishments, but he did not leave the path of devotion to God. Hiranyakashipu’s sister Holika had a boon that she could not be consumed by fire. Hiranyakashipu ordered that Holika sit in the fire with Prahlad in her lap. Holika got burnt while sitting in the fire, but Prahlad survived. Holi is lit on this day in the memory of God devotee Prahlad. Prahlad is believed to mean joy. Holika (burning wood), symbolizing enmity and oppression, burns and Prahlad (ananda), a symbol of love and gaiety, remains intact.